As I sat down to write this, I became acutely aware of how very charmed my life is.

We were met at the Lyon airport early Saturday morning by my dear friend, Sydney, and her French husband Mikael. From there we headed straight to Le Grand-Bornand for the holiday weekend. I’m still not entirely sure why it was a holiday weekend in this particular region of France, but that morning everyone was headed to the mountains. Mik’s family has a charming little flat complete with amazing view of the village. We had lunch on top of the mountain under clear, sunny skies in 50 degree weather. I couldn’t imagine a more perfect day! We were surrounded by adorably baby skiers giggling and shrieking in tiny French voices as they sailed by as rainbow-colored hang gliders floated above. There are charming local farms you can walk to with fresh cow and goat’s milk, cheese to much on, and baby animals to pet. Alas, we only had 24 hours on our side and were forced to make our way back to Lyon on Sunday afternoon. 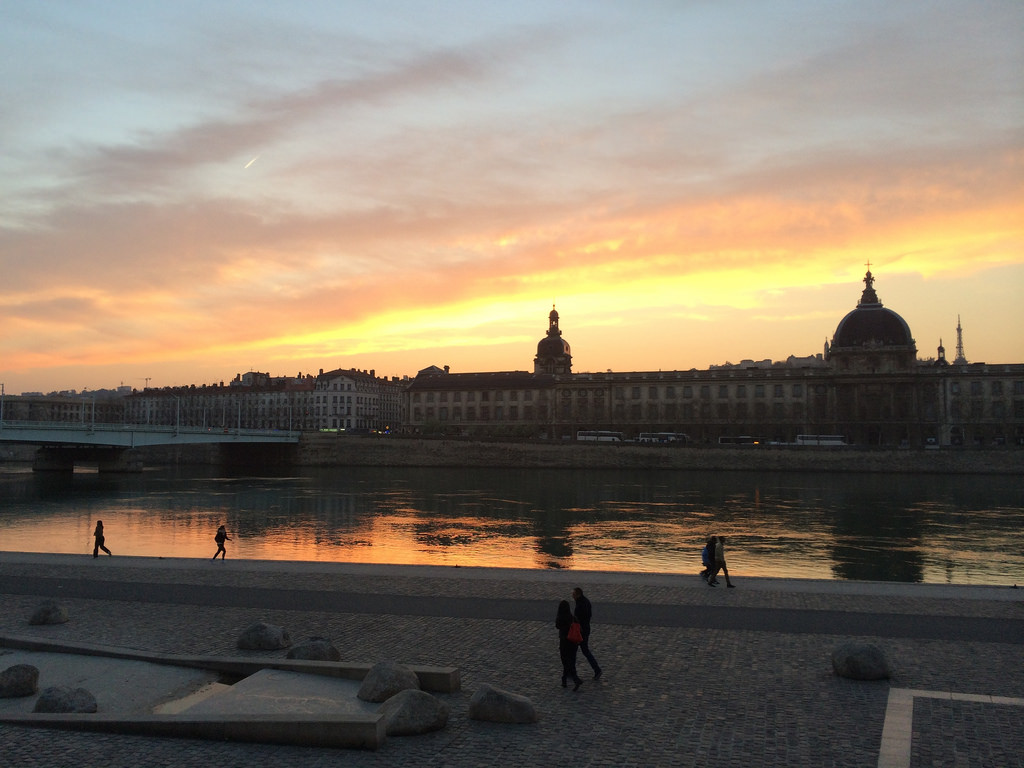 Lyon is an elegant city with beautifully detailed old buildings. The Rhône runs through the center of town, and on nice afternoons people have cocktails or coffee at the cafes which are generally boats that have been docked. Our second night there, we were fortunate enough to arrive as the sun was setting and the water reflected the yellows and oranges of the evening sky. We spent the rest of the evening wandering the streets frequently stopping to photograph alleyways, ornate buildings, and beautifully flowered trees. They just don’t build’em this way in the States!

My third night in Lyon, I met up with three young Frenchmen that I’d been introduced to via Facebook through a friend. They decided it was imperative that I try traditional Lyonnais food. Thus, we made reservations at Abel which has been around for almost 100 years! We began the meal with a traditional wine that was very dark purple in color, very sweet, and served in a glass shaped very much like a Champagne flute. For starters there was a delectable salade de boef, a recommendation from the waiter, which was thinly shaved beef (similar to gyros) in a tangy vinaigrette served with sliced white onions, parsley, and green peas. The boys ordered sausage with lentils which was also quite tasty. For dinner there was quenelle, which is a sort of savory soufflé made from fish. It was served in the shape of a loaf and the when they brought it to the table, the waiter spooned a light cream sauce with mushrooms. We had an excellent burgundy to wash it all down, and finished the meal with espressos and chocolate cakes. There was a grappa-like after dinner drink that smelled of rubbing alcohol and burned the entire way down. After dinner we walked along the river in a part of Lyon I hadn’t yet explored. There was a quick drink before parting ways. The French restaurants and bars don’t stay open particularly late (especially on weeknights) so we were forced to say our goodbyes far too early. I get the feeling they may turn up in Dallas at some point.

My last afternoon was spent with Sydney, who I grew up dancing with. She had been dancing in the Cabaret in Lyon when she met her husband and is now working on her MBA. We strolled around the neighborhood before stopping to have a beer on one of the boats that doubles as a cafe. The day was absolutely perfect as we sat on the deck of the boat sans coats soaking up the vitamin D. After catching up, we went to a posh indoor market housing tons of different vendors where we bought bread, veggies, small steaks and wine for dinner. She makes this lovely dressing that consists of balsamic vinegar, mustard a splash of olive oil and yogurt. It’s so simple, but divine. I want to put it on everything! The salad was perfect, the steaks were perfect, everything was perfect! Once we finished our wine we headed to Blogg for salsa dancing. After an hour in the sweaty, smelly, steamy salsa club we headed home to pack. There was an early train to Paris for us to catch.